You Don’t Find Christmas Under a Tree 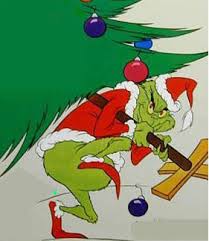 I’m sure you’ve heard about the Grinch. It’s one of my favorite Christmas stories. I make it a point to watch it each year. It makes me laugh and always reminds me what Christians is really all about. I especially like that puppy-dog-reindeer Max who can pull a sleigh ten times bigger than himself up a 3000 foot mountain. Dr. Seuss wrote the story fifty-five years ago, and it’s still a holiday-hit today.

Every December the Grinch went into his annual Christmas meltdown, when he saw the Whos who lived in Who-Ville as happy as Santa’s reindeer’s. Mr. Grinch lived in a cave on Mount Crumpit, far above the happy Whos. But every Christmas, the green Grinch couldn’t stand what he saw and heard from atop his perch. From the valley below came happy singing and waves of joyful noise. It drove him crazy. So he decided in his two-sizes-too-small Grinch heart to invade Who-ville and steal it all away!

Christmas is a time of the year when everything is supposed to be peaceful and joyful. Don’t allow all the demands and deadlines stress you out and make you a grumpy- Grinch. Remember, God is still in control. Christmas is not a time of gizmos and gadgets but it’s a time when God shows to us how big his heart is. It’s not all about presents it’s all about his presence. The Angels message was to you and I, not just to the shepherds; “Joy to the world the Lord is come. Let earth receive her King.” What a message, what a blessing. Grinch proof your Christmas and try to make it a time of refreshment and a renewal, joy and peace? He’s the reason for the season, so don’t be-naughty be-nice!

When the Grinch invaded Who-ville while all the Whos were sleeping, he took the popguns, bicycles, roller skates, and drums, the checkerboards, tricycles, popcorn, and plums! He swiped the Who goodies and put a stop to the feast. He even stole the Who pudding and took the roast beef!

When Christmas is over remember what you will need the most. You will still need a Savior who can help you carry your burdens, comfort you in your distress you, and as the angel said to Joseph, “save his people from their sins.”

In Jesus, God gives you a “Grinch-proof” life. When Jesus took all your sin and brokenness upon Himself and died on the cross for you, He made sure that nothing would ever rob you of God’s love again. When Jesus rose again from the dead, miraculously defeating the life-ending consequences of sin, He made certain that nothing would ever steal hope and eternal life from you. Now, that doesn’t mean that everything in this world will be rosy and bright; it does mean that the power of God, the promises of God, the strength and the courage that comes from knowing Him by faith, it will be yours no matter what the circumstance!

The Grinch may have his day, but the Grinch won’t have his way! Remember the story. After he stole all the Christmas décor in Who-ville, after he invaded the town and made off with everything from Christmas trees to the Christmas roast, he listened for the cries of disappointment from Who-ville. He stood on Mount Crumpit and waited for life to come crashing down. But, what did he hear instead? Singing! Songs of Christmas joy.

The Seuss story continued:
And the Grinch, with his Grinch-feet ice-cold in the snow,
Stood puzzling and puzzling: “How could it be so?
It came without ribbons! It came without tags!
It came without packages, boxes, or bags!”
And he puzzled three hours, `till his puzzler was sore.
Then the Grinch thought of something that he hadn’t before!
“Maybe Christmas,” he thought, “doesn’t come from a store.
Maybe Christmas…perhaps…means a little bit more!”

Well, if you know the Bible’s message, it means a whole lot more.  Who has more reason to sing when you know the very source of joy when you have the gift of life that lasts forever! He came once as a baby and He’s coming again as a King.
When the Grinch experienced the joy of Christmas, his heart which was once two-sizes too small, suddenly grew three sizes bigger. That is what Christ does to every heart that invites him in as Lord and Savior.

As the grand old saying goes,” Though Christ a thousand times in Bethlehem be born, it will avail you nothing until he is born in you.”

He’s Only a Prayer Away.

Have a Blessed Christmas.