We Are A Work In Progress 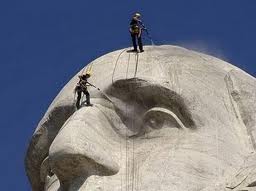 Being Made Into His Likeness

Artists often see a a sculpture, a painting, a picture in their mind long before others see it with their physical .

Back in 1927, Gutzon Borglum saw something that others hadn’t seen in a 5,700-foot mountain in South Dakota. After 14 years of drilling and chiseling, the rest of the world could see it, too.

Mount Rushmore has been called the world’s greatest mountain carving, and some of you know why. It features 60-foot high faces of four American presidents: George Washington, Thomas Jefferson, Theodore Roosevelt, and Abraham Lincoln.
The monument took vision, skill, and dedication to complete. And our text today describes how God uses vision, skill, and dedication in a project on which he is still working – a project far more ambitious than Rushmore – not making a monumental mountain, but helping humble humans.

What is God’s vision? To form us into the people we are meant to be; to conform us to the image of Christ; and to transform the world through us. God surely is an optimist. He knows better than any of us how hard is the work of redemption. But our text says He looks at us and knows what might be, then rolls up His sleeves and goes to work. It reads: We know that in all things God works for the good of those who love Him, who have been called according to His purpose. For those God foreknew He also predestined to be conformed to the likeness of His Son (Romans 8:28-29).

The word “predestined” troubles some people, and has been the source of theological debate. Some protest that it makes us merely puppets, God pulls all the strings, controls all events, and that we are victims of divine fate. Some use it to blame God that some are not saved, but predestined to hell. That is not what Paul says. He is simply stating that salvation is God’s work from start to finish.

In our salvation, there is a golden chain of activity: Those He predestined, He also called; those He called, He also justified; those He justified, He also glorified (Romans 8:30). And since it is God-initiated and God-completed, we know that it will be done right.

General George Patton believed he was fulfilling his destiny to be a great soldier. In the move, Star Wars, Luke Skywalker hears a voice saying, “Luke, it is your destiny.” He is to be a great Jedi knight. Many would like to know their destiny and so they resort to astrology and fortune telling.

God calls. This is not referring to some hidden and secret voice in the night or in private revelation. Earlier in Romans Paul said: Faith comes by hearing, and hearing by the Word of God… How will they believe in Him of whom they have not heard? … How will they hear if no one preaches? The Holy Spirit, through the Law, leads us to know our sins, and in the Gospel, to believe the good news that we are saved from sin by the death and rising of Jesus. Through Baptism we are born anew, our destiny changed from death to life!

Being saved is not a gradual process that takes years, like the carving of Mount Rushmore. God does not take us through initiation, until we finally get to the point where we are saved. No, whom He calls, He justifies. To be justified is not to be put on trial, to see if we will behave better. It is to be declared not guilty of sin, to be absolved.

It took countless hammer blows to carve Mount Rushmore. But the hammer blows in which we find salvation were delivered on Mount Calvary, on Golgotha’s cross. There, the innocent hands of Christ were pierced and fastened to the cross. There, the Bible says, the sentence of condemnation that hung over our head was put on His head and nailed to the tree. And with His death and rising, it has been buried, too.

To be justified is an instantaneous work that is entirely God’s doing. He accepts Christ’s innocent life and perfect death for us. He cancels our sins and cleanses our heart. But God is not finished with us once He has saved us. God also has in mind the shape of what we are to be. What is our potential as His child?

Paul invites us to share God’s vision of what we can be. Do we believe that His Word and Spirit have the power to conform us to the likeness of Christ? As Christians, we are given a vision to see not only what we receive from God, but what we are as God’s children.

Some spend life observing the way things are; others, imagining how things can be. Think again of Mount Rushmore. One hammer blow at a time; a magnificent monument took shape. I suppose if the same amount of effort of the hammer had been aimed differently, it also could just have lowered the mountain by a few feet.

The Word of God is mightier than any hammer. If God wanted to, He could simply level us, humble us, and put us in our place. But here is the good news again from this text. God is always at work for our good! Many other things in life may wish to tear us down. The devil and our own sinful self would reduce us to worthless rubble. But God does not let these things keep Him from His purpose. Through it all, He works to conform us to the image of Christ.

When Jesus called His disciples to follow Him, He also shared with them His vision of what that would mean. They were to love as He loved; to serve as He served. By this they will know that you are My disciples; if you have love for one another. Let your light so shine that men may see your good works and give glory to your Father in heaven.

It is the likeness of Christ to which God conforms us. And it is an ongoing work. The Bible says: He who began this good work in you will carry it on to completion in the day of Christ. How is this done? It is through Baptism, through the Word, through the Lord’s Supper that He has promised to act. That is why God’s people gather around Word and Sacraments, where He applies His tools to us. A hammer has no impact on something it does not strike. And the Word’s magnificent power is wasted when we neglect it.

While the presidents, in a sense, were immortalized, their memory kept alive for generations; what God has done for us is far more magnificent. God gives true immortality. Not just your memory will be kept alive, but you will. Your mortal body will pass through death – it will be raised, glorified. You will live forever! Even the great mountains someday will pass away, but not the promises of the Lord. Your destiny is to be an inhabitant of heaven. Your name is written in the book of life.

God envisions yet another honor for us. We are also God’s agents to transform the world. Too often, we get used to what we see, and think it can never be different. We give up on people, and pigeonhole them. They will never change, we say.

We may give up on ourselves. Maybe there is a sin in which you are caught that you have given up trying to break – maybe an impasse with another person. But a little word may begin a chain of events to break through that wall. With God, nothing shall be impossible.

The fact is, people do change. If you are a believer in Christ, it has happened to you, courtesy of the grace of God. It can happen to others. Some change happens by learning information. Teachers dedicate their lives to the belief that people have potential to learn, to develop, to change. The most important happens from learning the Word of God.

During coal mining disasters rescuer workers work around the clock desperately to try to reach miners trapped hundreds of feet below the surface in a flooded mine shaft. What if the drill had reached them, the basket was there, and the men would have said, no thanks – I’ll find my own way out? It would have been pure foolishness.

In a similar way, people can harden themselves against the purpose of God. They can deny His call, close their ears and shut their hearts. They can pursue other paths to heaven. But there is only one way. And it is our purpose to proclaim that way.

Sometimes you have to see something before it is there, or it will never be there at all. What a sculptor did for Mount Rushmore, God has done for you. Before you were born, God knew you. Before you knew Him, He envisioned you as His child. And He has worked to turn that vision into reality by bringing you to faith in the Jesus who died to save you. God calls. God justifies. God glorifies.

What does God yet have to do in you and for you? Look with the eyes of a sculptor on the mountain of your life, and see what yet may be by His grace. Be sure of this. God formed you to be His child. He conforms you to the likeness of Christ. And He works to transform lives through you. In joy and sorrow, sickness and health, God is consistently at work for your good.

His Mercy is Only A Prayer Away.