Un-Seen But Not Forgotten

Christians do not volunteer for martyrdom but they are willing to die for their faith. 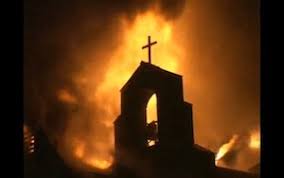 A Christian martyr is a person who is killed for following Christ. Their enemies often portray them as spies, enemies of the state. As was said of the founder of Christianity itself, by his enemies, ““We have found this man subverting our nation. He opposes payment of taxes to Caesar…”  (Luke 23:2) It’s the same-old same-old refuge of lies right down to this present evil day.

The list of Christian martyrs is long and bloody and grows by the hundreds each day. Prison walls that we know nothing of echo with their despair. Chains and torture racks that we only see in pictures of prison camps are stained with their blood.  Their cries like the moans of a hopeless Auschwitz are deaf to our ears. Unmarked graves cover their bones and hide them from our eyes.  These John the Baptists, these Stephens, these Pauls, these modern martyrs for our faith must not become the pogroms, the forgotten heroes of the Church.

Little wonder the scriptures says; “Continue to remember those in prison as if you were together with them in prison, and those who are mistreated as if you yourselves were suffering.” Hebrews 13:3

Reports coming out of Sri Lanka, which is 70% Buddhist and 6% Christian tell us how, when Christians met for worship at Hiddaduwa under the watchful eye of police, they did nothing to protect them as some 250 Buddhists — led by their monks — broke down the congregation’s doors, smashed pews, destroyed musical instruments, shattered their windows, set fire to Bibles and hymnals, and sent the congregation running for their lives.

In 2013 Sri Lankan Christians were attacked more than 65 times.

But Sri Lanka is not at the top of the list of countries where believers are persecuted. There are nations – Yes, entire nations – where a Christian literally takes his or her life into their very hands if they desire to follow Christ.  Beheadings and de-limbings are almost commonplace in these countries.

The 20th century was the bloodiest in all of history for Christianity. The Open Doors USA organization estimates that around 100 million Christians were persecuted for their faith in 2013; but the enlightened 21st century is following in its bloody footprints,

One of the most violent attacks against Christians in our modern century took place in India’s Orissa state. By the hands of Hindu nationalists, we’re told, that “as many as 500 Christians killed, many hacked to death by machete-wielding Hindu radicals, and thousands more injured and at least 50,000 left homeless.”

Just a couple of months later, on a sunny Sunday morning, two suicide bombers entered the All Saints Church compound in Peshawar, Pakistan. These Islamist radicals waited until the services were over and the nearly 500 worshipers began to gather for a meal together. At 11:45, they detonated their suicide vests and killed 78 people and injured another 130. It was the deadliest attack on the Christian minority in the history of Pakistan.

North Korea, which ranked as the most dangerous place for a Christian to live in 2013 remains the most dangerous country for Christians to live in 2014.  The God-like worship of its rulers leaves no room for any other religion. Any reverence not focused on the Kim dynasty is seen as subversion to the state.  It is estimated that between 150,000 and 200,000 Christians in North Korea are imprisoned in forced labor camps. Immediate family members of Christians are also targeted, often being placed in re-education camps.

The second most dangerous place for Christians to live is Somalia. The public policy of its leaders is that there is no room for Christianity alongside that of Islam.  Their anti-Christian policy is enforced by terrorist groups who consider killing Christians as an honor-killing. To purchase even the basic necessities of life Christians have to hide their beliefs and live incognito.

The Third most dangerous place for Christians to live is Syria, where 45, 000  believers have been forced to flee with what they can carry with them. How sad when we remember that Syria was one of the first countries to receive Christianity, where its followers were first called Christians, where now only 10% of the population is Christian, where the majority of the martyrs of Christ are now laying down their lives.

How sad that world leaders seem so little concerned about the injustice being directed against followers of the Lord Jesus Christ. Their stories of persecution don’t make much of a splash on the daily news.  The Hollywood elite, who are always speaking against violence, bloodshed and hatred express no sympathy towards them.

The three countries mentioned above are only three of more than 40 other countries where our fellow believers are being persecuted for their faith.

As the apostle Paul asked the Believers of the 1st  century to pray for their persecuted brethren so let us of the 21st century do the same for  our persecuted brothers and sisters all around the world.

The best is yet to be For the Child of God