The Final Offering for Sin 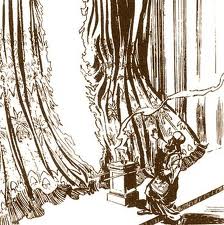 The Veil of The temple Torn In Two

The interior of the temple proper was divided into two holy places. The part nearest the entrance was called the sanctuary or holy place. Here were kept a sacred lamp stand, a table for ceremonial bread, and an altar for incense. A second area was called the Holy of Holies or the Most Holy Place.

This inner room once contained a golden censer for incense and a mysterious box called the ark of the covenant containing souvenirs from the wilderness wanderings: the stone tablets, Aaron’s rod which budded, and a golden pot of manna. Upon this ark was placed a mercy seat, a kind of altar, with sculptured winged cherubs of hammered gold at each end.

Only the high priest could venture into this holiest place, and that only once a year with the blood of animal sacrifice for atonement. This Most Holy Place was closed off by an enormous curtain.

The Temple In Jesus Day

The temple of Jesus’ day was new. Solomon’s temple had long ago been destroyed by the Babylonians. It was rebuilt under great stress in the time of Ezra and Nehemiah with the help of Darius king of Medo-Persia. However it was inferior to Solomon’s temple (and the one Ezekiel saw in his visions.)  About twenty years before Jesus came, work commenced to reconstruct this somewhat shabby temple.  Herod did this to please the Jews and the result was a truly magnificent. It was still being completed at the time of Jesus ministry. The disciples of Jesus truly admired its architecture.  One day  as Jesus was  looking  at it with them he made a most dire prophecy. He ironically but accurately foretold its destruction

“Then Jesus went out and departed from the temple, and His disciples came up to show Him the buildings of the temple. 2 And Jesus said to them, “Do you not see all these things? Assuredly, I say to you, not one stone shall be left here upon another, that shall not be thrown down.” Matthew 24:1-2

Later, at our Lord’s crucifixion, the great curtain veiling the Holiest place was torn from top to bottom. The room that no one dare enter upon fear of death was laid open, bare for all to look into. The Ark of the Covenant was now gone, the holy artifacts now all gone. (Taken to Babylon during the Captivity and lost to antiquity…)  Nevertheless, the symbolism was there to be seen by all. The veil of the temple that was split wide open from top to bottom meant that now the way into the Holy of Holies, God’s presence  was open through the rending or slaying of Christ on the Cross. It happened at the same moment that Jesus Shouted from the Cross just before he died; “It is finished!”

The Lord could have destroyed the temple right there with the earth quake as mentioned in Verse 51; But he did not. That wasn’t coming for another 40 years (70 AD)  a pivotal moment in Jewish history.

God could not have given the Jews a clearer sign. Christ had opened the way into the Holiest Place; the temple, its priesthood, and its blood sacrifices were now defunct. The final sin offering had been made. God did not destroy the temple then because He was giving the Jews time to make a voluntary end to sacrifice and offering, and to recognize the death of his beloved Son instead as the final sacrifice for sins.

Caiphas The HighPriest and His Council Could Have Lead The Way

The one man who had been allowed to enter the Holiest Place through the curtain was Caiaphas the high priest. As the Temple Priest he  beheld the torn curtain, did he forget that only days ago he himself had spoken under the spirit of prophecy to the Pharisees who were plotting to kill Jesus?

Caiaphas himself had later challenged Jesus,

The Day of Pentecost

Some weeks later another sign attracted the attention of all Jerusalem.                       During this time devout Jews from every nation within the Roman Empire were celebrating the Feast of Pentecost at the temple. On that day, there was a miraculous outpouring of The Holy Spirit upon 120 people who miraculously began speaking the various languages of the pilgrims. The Apostle Peter stood up in the temple and preached salvation through Jesus Christ and 3000 souls’ responded to His message.  He told them that Jesus was now the one died for their sins. But it did not stir Caiaphas and his council of 70 elders

Were peoples sins forgiven through the blood of animals slaughtered in the temple after Jesus laid down his life and shed his own precious blood?

Some say that animal sacrifices still held good for some people after the crucifixion and up till the end of them in 70 AD. Others will say that God allowed the old covenant to continue in effect for the sake of a generation of Jews who did not readily accept the gospel.

“And every priest stands ministering daily and offering repeatedly the same sacrifices, which can never take away sins.” Hebrews 10:11

Regardless of the dispute, there is no dispute about this; that Now, Today, Christ is and always shall be the final sin offering.  He put a definite end to the offering of animals as an act of atonement.

His cross abolished animal sacrifice that only covered sin. His precious blood washes away, cancels out all sin for ever and ever; never to be remembered against us any more.