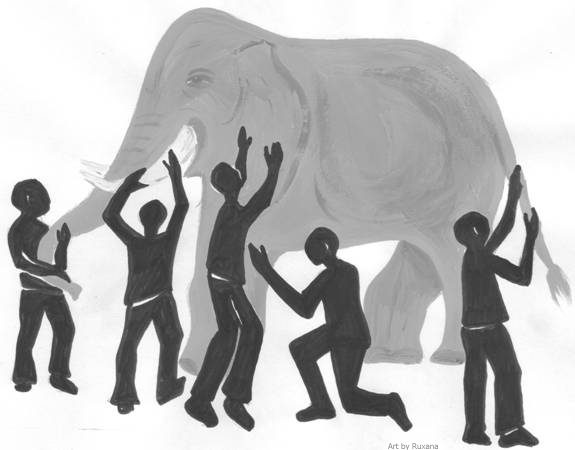 I enjoy listening to experts debating. I listened to a debate a short time ago about _____  Verses Christianity. As a rule, you can learn something from both sides. However, attitude is very important. The opponent of Christianity forgot to have his attitude checked at the door. The only thing he convinced me about was that he was an acadamian nut who got hit in the head at some time in his life with a fifteen pound unabridged dictionary.  The debater who took the Christian side had an impressive array of university degrees behind his name.  He was an Expert in his field. But that is not what impressed me. We all know that Experts designed the gas chambers at Auschwitz and that experts like Thomas Malthus, Robert McNamara, Paul Ehrlich and the Club of Rome; all apocalyptic prognosticators of doom and gloom regarding the worlds’ population eating itself out of house and home, have been proven as wrong as the experts who  predicted that bumblebees can’t fly and that the delicate female constitution would be unable to withstand the strain of typing on a typewriter, or that travelers would get nosebleeds if they exceeded the blinding speed of 15-miles-an-hour?  Perhaps you heard of Joshua Coppersmith who  was arrested in 1865 in Boston for selling stock in the telephone. Why was Coppersmith arrested? He was arrested because the experts knew the human voice couldn’t be carried over a wire.

It Was His Attitude!!

Yes, it’s petty, and just a little juvenile to say,  but it’s true. When you listen to a blow hard expert being proven wrong it gives you a whole lot of pleasure. It causes the fun-meter needle in your brain to go right off the chart.

It reminds me of the man who was enjoying his 65 wedding anniversary. Husband and wife were as happier than two robins in the rain. They were loved by their children, grandchildren, and great-grandchildren who eulogized and congratulated them. When it came time for the groom of three-score-years-and-five to get up and speak, he said with a gleam in his eye “This has been a most satisfying day. It has been satisfying for us to have so many of you gathered here. It has been satisfying to hear the kind things you’ve said. But it’s most satisfying to know our parents were wrong when they told us our marriage wasn’t going to last.”

People like it when an expert is proven wrong.  How many times have you laughed about the one regarding the sickly old man who outlived the doctor who told him that he had three months to live? But it’s just as exhilarating to hear the humbled experts laugh at themselves because they’ve been proven wrong.

Of course you got it right. You’re smarter than a fifth grader. But perchance you didn’t don’t be insulted; the favorite horses at the Kentucky Derby don’t usually win either. Whether you did or did not, let me ask you another question: More than 2,000 years ago our heavenly Father sent His Son into this world. Why Was That!? Why did  Jesus enter this world?   Many experts will tell you that Jesus came into this world to be a great teacher, a noble example to emulate, a person who can give us some inside truths on how to live right.  If you thought any of those things you would be half right. This is one of my main beefs with so many worldly philosophies. They’re just half right; they’re full of half truths.   It’s the other half that leads to destruction. Jesus was much, much more than a teacher, a philosopher, a moralist.

Why did Jesus come into this world? Some religions will go so far as to say that Jesus came as a prophet. History verifies that Jesus did speak with a prophetic voice. He accurately foretold the fall of Jerusalem, and that this world would never become a utopia but would remain a red and white chessboard of wars and rumors of war until He returns … Jesus was far far more than a prophet; He was the Son of God.

Read the Gospels for your self and see how the inspired Scriptures clearly ascribe to Jesus the unique names, the special works, the divine attributes, the honor and glory, which can only be rightly given to the Son of God. Why did Jesus come to this world?

Have you come into contact with a church which maintains Jesus came to us as a prototype of what fine fellows we humans can be if we’re really really worked at it?  If that’s what the experts have said to you, you should know they are and always have been totally-totally wrong.  Surely two world wars, the holocaust,  followed by 100 million killed by atheistic communism, and the present Middle East being on fire  took the shine off that plastic apple.

Why did Jesus come into this world? Let me be clear; Jesus came into this world to do for us what we could not do for ourselves. That’s the message which comes through loud and clear when you take a good look at the Gospel. That word Gospel means, “Good News!”

In Luke 10:25-28 (you should read the whole story) an expert lawyer tried to trick Jesus with a question. To get to my point quickly I will just tell you that Jesus agreed with his trick question as far as it went because it was a half truth.  Here It is; if you want to be saved from the penalty of your sins, if you want to go to heaven after you die, you have to love the Lord your God with all your heart, and with all your soul, and all of your mind; with all of your strength. If you want to be saved, you need to love your neighbor, which means you must love everybody as much as you love yourself. And here is the punch line; that, my friend, is something you nor I nor anybody else can ever do! That standard of perfection leaves me us as hopeless to change ourselves  as it is for a tiger   to change its  stripes. It can’t be done! There has never been a person born, other than Jesus, who can love God with that kind of intensity or that kind of purity. None of us can love our neighbors as ourselves.

Forget about that talk of loving your neighbor as much as you love yourself; we don’t do it; we can’t do it. That’s God’s standard but none of us can attain to it. It’s a slippery glass mountain that none of us can climb. If someone is kind to us, we will, on a good day, most probably repay that person with an equal benevolence, an equal amount of respect, but not much more than that. On the other hand, if someone treats us with disrespect, dishonor, or disregard, we feel perfectly justified in doing the same to them.  I’m not as negative as a Spengler, but no one can deny that our pride our greed, our bent for power has allowed hatred, prejudice, cruelty, and revenge to flourish in every century, in every community, and in every human heart. In mine as well as yours.

Why did Jesus Come? Because, we can neither love God nor our neighbor  as we ought is why Jesus came into this world. Jesus came to do for us what we could not do for ourselves. Save us from the penalty of our sins.

How Much Does Christ Love Us!

Like he loved the untouchable leper enough to place His hands upon him and heal him. Like he loved the adulteress enough to step between her and a crowd set to stone her to death. Like he loves you enough to collapse in Gethsemane’s dirt as the weight of the world’s sins was gradually laid upon his shoulders. Like he loves you enough to go on trial for his life. Men lied in that court room thatbday as they tried to tarnish his perfection, but he did not defend himself. Which of us would have remained silent? His love for us is why he did not strike every member of that kangaroo court dead with a stare. It was his love for you that prevented him from pulling the nails out of his hands and sending them flying into the hearts of those who pushed him another step closer to his ignominious death.  Jesus endured all this because he loved us. Jesus suffered all this so all who believe on Him might be forgiven. Jesus came to do for us what we cannot do for ourselves. He came to save us; to save anyone whom the Holy Spirit would bring to faith. Did Jesus love us? Look to the manger, gaze upon the cross, and stand in awe before His empty tomb and ponder;  and than invite Him into your heart.

Prove Him  to yourself right now! He wants to make himself real to you.

A person with an experience is never at the mercy of a person who only has a theory.