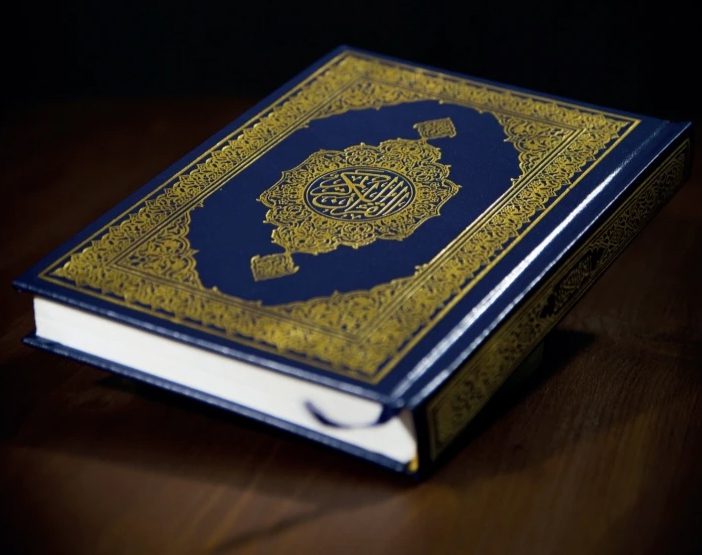 An absolute proves you either right or wrong. There are fifty shades of gray but not fifty ways to say 2+2 = 4. You cannot say it is a matter of interpretation, it is allegorical. No! It means exactly what it says everywhere, every time, and every place. No exceptions to the rule. And infallible claim means Exacto, Perfecto, 100%.

Famous American Jewish, rabbi, academic, and archaeologist Nelson Glueck (d. 1971) who during his illustrious career discovered over 1,500 ancient Biblical sites said that not one obelisk, one monument, one artifact, one mural, one amulet, properly understood contradicts the Old Testament. The only ancient book that passes all these tests is the Bible. When it comes to the Quran it fails miserably. The fiery furnace of reductive criticism, source criticism, textual criticism, and historical criticism only revealed the pure gold of the scriptures, but the impurities of the Quran. The bubbles have risen to the surface by the thousands. Away with the incredible, untenable claim that the eternal tablets of the Quran that Allah guards no man has changed. The thirty-seven (or more) official Arabic Qurans in circulation today decree otherwise. I have given plenty of examples in previous articles confirming this. It can no longer be the unbending boast of an Iman that the Quran is as eternal and unchangeable as Allah himself (c.f. Surah 10:15; 15:9, 18:27; 85:22).

Now let us consider the claim that the Quran is a book of style and poetry so formidable that only God could have written it, and not a camel driver who could not read or write. (Although even some scholars refute the claim that he could neither read nor write).  On five separate occasions, the Quran says that it is so beautifully written that no book in the world can duplicate it. It is unsurpassable in beauty and unequaled in poetry. No mere mortal could have composed so rich a crown of jewels. Every inspired word and thought shows that it is the greatest of all books, most eloquent in all the world’s literature. This is the high standard that Eastern Quran scholars hold before the world (cf. Surah 2: 23; 10: 37-38: 17:88). Imams frequently reiterate this to their followers, and they believe it only because they are told it is so not because they have studied it through for themselves.

However, when you push back the curtains and let the early morning sun shine upon its pages, you cannot believe your unsuspecting eyes. Nothing could be so far from the truth. You do not read many pages until you admit to yourself that this is not beautifully written. Many of its sentences are unfinished, and many of its stories are half told. Many of its stories are borrowed from the gospels written six hundred years earlier and copied from the Apocrypha written two hundred years after the gospels, and borrowed from the Talmud written between 200-500 AD. There is only one complete story in the Quran, and that is the 111 verses in Surah 12 about the story of Joseph. (Whose exemplary life of marital fidelity Mohammed never did emulate). The rest of the stories are as unconnected as jumping beans in a frying pan. They jump irradicably from place to place, lacking cohesive conclusions. The claim to supremacy and beauty, style, and eloquence from cover to cover is a grand illusion.

In passing let me mention a blatant historical error found on its pages bright and fair. It is that Pharaoh sentenced Joseph’s prison mate to be crucified although it did not exist at this time (cf. Surah 7:124, 2071, 26:49).

As a person who loves to read and has read hundreds of books from Allah to Zeus and much in between, I personally found reading the Quran to be an exercise in futility, grasping for the wind and boring to the bone. It was impossible to connect the dots. There is a multitude of earth-bound books far more eloquent in style and eloquence. William Shakespeare’s Hamlet, George Orwell’s 1984, and Leo Tolstoy’s War and Peace… far outweigh it in all aspects. But even if true, the beauty of style does not make any book the Word of God. Secondly, neither does inerrancy make any book the Word of God. Notwithstanding, if a book is the Word of God it would have to be both. The Quran is not a tome, it is shorter in length than the New Testament. The shorter the book the greater the possibility for inerrancy and beauty, and yet it fails the test in both beauty and inerrancy.

Go to any major city library and there you will find beautiful, inerrant books on its shelves.  Dictionaries, phone books, diaries, and books on mathematics can all make the claim to inerrancy. But they are not God-breathed, as is the Bible (Theopneustos).

When with great anticipation you first cautiously open the beautiful, calligraphed cover of the Quran and start flipping through its gold glossed pages, you want to feel that you are about to ascend Jacob’s golden ladder with every cautious step taking you closer to beautifully expressed truths about God. However, it is not too long before you discover that it is not more beautifully written than many books you have ever read before. The stories leave you confused. It is a sepulcher beautiful on the outside but full of dead man’s bones. English Philosopher Anthony Flew an atheist who converted to deism said, “To read the Quran is to do penance.” However, Islamic experts tell us that its beauty is mostly in the Arabic language. But this is lame reasoning. Why would Allah give a book meant for the people of the world in a language which most people do not read nor speak and in a language that was vastly inferior to other more developed languages of the seventh century such as Hebrew and Greek?  The Arabic alphabet was not fully developed until the seventh century. Then it had only 14-16 letters. Today it has twenty-eight letters. Most modern-day Arabs do not understand the ancient language of the Quran. It is an idle boast saying that anyone can clearly understand its every thought, word, and deed (cf. Surah 16:36; 32:3; 34:43-44; 36:2-6). Yet Imams keep beating the mantra drum that it is the most beautiful book ever written. Only people who have never read its 114 chapters make that claim (Surah 2:23).

Like biting into sour grapes, your sweetest expectations turn bitter as you continue from one chapter to the other. Certainly, like most middling books there is some beauty and style in it, but it is spotty, brief, and most alarming of all not original, mostly borrowed. Wherever, one dares to point the finger at a verse in the Quran and say, “Here is unutterable glory and beauty and style,” One would also have to answer the question; “Where did this beauty and style come from? Is it original, is it plagiarized, is it borrowed, is it stolen? Here is the uncomfortable truth; textual critics can trace these eloquent expressions back to second-century Christian and Jewish writers of prose and hymns outside of Islam.

To pull the fire alarm handle down finally upon the Quran’s claim to be unsurpassed in eloquence, beauty, and style; the disturbing truth is that linguists can trace 70% of it right back to its grassroots here on earth, not to a golden tablet in heaven. This disturbing fact makes the Quran authors the world’s greatest plagiarists, liars, and deceivers. Again, honest-seeking Muslims who say it is beautiful do not say so because they have read it in Arabic, God’s favorite language, but because their Imams repeatedly tell them it is so. How ironic also that the Arabic text contains non-Arabic words. Even more puzzling is that seventy-five percent of Muslims do not and cannot read Arabic. The answer is simple, Arabs copied the Quran in the Arabic language to reach the Arabs not because theirs was a language superior to Hebrew and Greek (cf. Surah 6:155-157; 46:12). The Arabic language of the seventh century was ghastly inferior to the vocabulary of the Jews and Greeks.

It is certainly true that the golden-leafed covers of the Quran are beautiful to look upon. Their calligraphy and especially their architecture are dazzling. Some of their mosques are the most beautiful buildings in the world. Islam’s famous trilogy of books; the Quran, the Hadith, and the Sira standing side by side on a beautiful mahogany library shelf looks so erudite, and scholarly, and makes an impressive background in any audio clip. But so is a golden chalice laced with poison, beautiful to look upon, and so was the fruit on the tree in the Garden of Eden “pleasant to the eyes.” Outwardly much evil is appealing to the eyes and the five senses but inwardly filled with death. Like the Quran, the danger lies in its content, not in its outward appearance. Its content is as fatal as the poison that Socrates drank, as fatal as the pot of stew served to the students in Gilgal when one cried out, “There is death in the pot,” (2 Kings 4:38-41). And so, there is death in the Quran that millions of innocent Muslims eat from, drink from, and quote from, pray from every day. Stay away from Islam and its golden-covered books. Consider its false promises like those made to Adam and Eve as they gazed upon the beautiful-looking fruit of the tree and the destruction that followed their first bite. Do not buy into the Imam’s claims that the Quran you hold in your hands today is as exact, and unchangeable as the Quran inscribed on the tablets in heaven.

Surah 85:22 reads, “Inscribed in a tablet preserved,” meaning that the angel Gabriel sent the Quran down from heaven to Mohammed over a twenty-year period between 610-632 AD and it shall never pass away. Islamists tell us that copyists first copied the Quran in its complete form between 632-634. Secondly, they tell us there was a second revised edition of the Quran completed some twenty years later by 652 under the auspices of caliph Uthman. And from that day to this day the Quran has not changed one iota.

The coup de grace, the kiss of death to Islam, or the kiss of death to all its critics lies right here. Place in any linguistic expert’s hands one copy of this beautiful, eternally preserved book with all 114 chapters and without one dot missing. Better yet produce ten so that they can compare them and see if there is not one variance between them all. This is not a tall order, for there ought to be ten thousand of them in Mosques and libraries and scholars’ hands and common people’s homes. The irrefutable, indelible facts are in, and no expert can erase them. They all tell us the same story, that for fifteen hundred years Islam has been searching for something that never was.

To all honest seeking Islamists, let Knowledge speak and Wisdom listen. Give Jesus Christ a chance, invite him into your heart. He is the way, the truth, and the life and only a prayer away