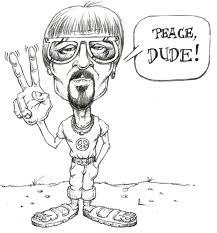 I shall never forget, the first time I visited the United Nations building in New York City and stared upon the tremendous statue there of a very powerful man beating a sword into a plowshare.  Inscribed into the base of this great monument, were words, ‘We Shall Beat Our Swords Into Plowshares.”  These words are taken from the Bible, Isaiah 2:4.  I shall never forget how impressed I was at the craftsmanship of the sculptor who forged it so skillfully and beautifully.

How many statesmen and philosopher and truth seekers have dreamed dreams of bringing Peace to this troubled World?  Victor Hugo, one of the greatest writers that France ever produced, made this prophecy, concerning the twentieth century:

But Hugo was wrong, dead wrong. His hope was ill-founded. Like Edgar Allan Poe he lived in a world of dreams; dreams founded on what he thought were the genius of man. But it was all star dust; as futile as a little boy dreaming that his toy soldiers would come to life.

Here we are in the 21st century and have you read or heard the latest news! We still have wars and rumors of war, and nations still rise up against Nation…in fact more so than ever before.  Someone has said: that in 3,500 years of recorded History, there have been only 286 years of Peace.  This is about 8% of the time.  The other 92% of the time, we have spent killing one another. The other 8% was probably spent  paying the debt while resting up for the next one war.

Take note of these words, and I quote:  “The streets of our country are in turmoil.  The Universities are filled with students rebelling and rioting.  Communists are seeking to destroy our country.  Russia is threatening us with her might, and the Republic is in danger.  Yes, danger from within and without.  We need law and order, our Nation cannot survive.”

Are these the words of Politian’s in the 21st century?  No! The above statement was made by Adolph Hitler in 1932.  So we see that the same old hassles and fears are still with us.  Peace is the most talked about subject in the world, but the least experienced.  You can talk about Peace all you want, but unless you have it in your heart, you’re battling with the breeze.

Men will never have Peace “with” one another, until they first of all have it “within” their own hearts.

Amid the horrors of World War I, there occurred a unique event in the annals of warfare. For a few hours, a temporary truce was declared. All became quiet on Christmas Eve 1914. The war was only five months old and already around 800,000 men had been wounded or killed. As Christmas day approached, the soldiers began to think. Surrounded by death, they reflected. So far from home and the things they loved, these soldiers proceeded to ponder. Then something happened. British soldiers raised signs that said “Merry Christmas.” From the British trenches, a loud, sweet, tenor voice began to sing “The Lord Is My Shepherd.” From the German side, a rich baritone voice joined in, “Der Herr Ist Mein Hirte”—the same song in German.

Early on Christmas morning some of the British soldiers scrambled out of their trenches into no-man’s-land. They carried a soccer ball. Between the trenches, they started a game. Some of the German soldiers joined in. It was England v. Germany. Those who were there say the Germans won 3-2. In some places, the truce continued the next day, neither side willing to fire the first shot. Only when fresh troops arrived did the war resume.

What force changed hatred into a handshake? No human force could do such a thing. Only Jesus has such power

While there may never be Peace on this Planet, there can be Peace within your heart.  And it will flood your soul, the moment you ask Jesus Christ, the Prince of Peace, to come into your heart, and wash your sins away.

I ask you today:  Have you ever invited Him into your heart?  If not, don’t wait a minute longer.  With all sincerity, do so right now!  And you will experience God’s Peace, the Peace of sins forgiven.  It is a spiritual experience that passes all human understanding, a Peace that the world cannot give and cannot take away.