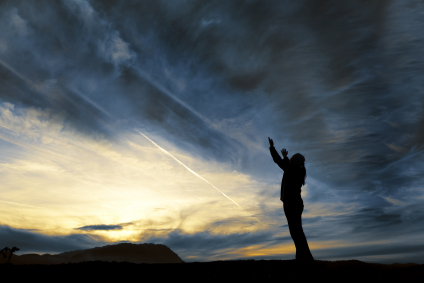 “Yours, O Lord, is the greatness and the power and the glory and the victory and the majesty, for all that is in the heavens and in the earth is yours. Yours is the kingdom, O Lord, and you are exalted as head above all.”   (ESV 1 Chronicles 29:11)

This is the first occurrence in Scripture of the great testimony of worship: “Thine is the kingdom.” In the modern world, however, there are relatively few who acknowledge Him as King of creation. Except for a small minority, most people believe that the universe has evolved and man is king.

David’s prayer for his son and successor Solomon is similar to “The Lord’s Prayer”, that Jesus taught his disciples to pray. The man of the world thinks that “It’s all about me.” How quick the secular man is to magnify and exaggerate his own importance.

To put things in perspective, let us remember that in heaven, as the ages roll on and on through a long, long eternity, numberless angels, along with all of earth’s redeemed of all the ages will be around God’s throne saying, “It’s All About You! It’s All About You!”

Get caught up in praising God instead of worrying about all your problems.

David’s prayer will be echoed again in the great prayer of the cherubim: “Thou art worthy, O Lord, to receive glory and honor and power: for thou hast created all things, and for thy pleasure they are and were created” (Revelation 4:11).

Then, soon afterward, “the four and twenty elders” utter their prayer: “We give thee thanks, O Lord God Almighty . . . because thou hast taken to thee thy great power, and hast reigned” (Revelation 11:16-17).

Someday, every knee will bow and every tongue shall confess Him as King of kings and Lord of lords. “Yet have I set my King upon my holy hill of Zion. . . . Be wise now therefore, O ye kings: be instructed, ye judges of the earth. . . . Blessed are all they that put their trust in him” (Psalm 2:6, 10, 12).

In that day, “there shall be no more curse: but the throne of God and of the Lamb shall be in it; and his servants shall serve him” (Revelation 22:3).

The awesome adventure of praising Him who was and is and is to come.  with all your soul.

It Doesn’t Get Any Better Than This!