Mecca, Where Are Your Ancient Foundations! 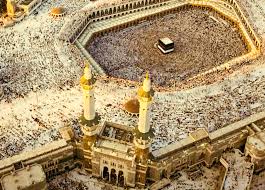 Where are Your Ancient Foundations!

We are told that pre-Mohammed / Islamic / Mecca was the ‘Mother of all Settlements.”  Adam & Eve supposedly lived there; Abraham and Ishmael supposedly visited ancient Mecca and while there  built the Kaaba  (Surah 2: 125-129).

Islamic historians tell us that it was a great center of trade and temples, roads and walls, aqueducts, and wells.  It was so fertile that olive trees and fifteen different spices thrived in the rich soil of its   surrounding countryside.  And yet all  evidence says otherwise.  Archaeologists have not found a single foundation, a single marketplace, a single graveyard, a single bone, seed, or coin. There are no ancient stones crying out here as do the ancient stones of Jerusalem and Ur, and Babylon, and Nineveh, and the Maya, Inca, and Aztec civilizations saying once a great city thrived here.  Mecca is mentioned only once in the Quran (Surah 48:24)  which seems rather  peculiar when you are told it was the central headquarters of Islam for thousands of years.  Mecca is not mentioned in recorded history until 741 AD or over 100 years after Mohammed’s death in 632 AD. And neither is it found on any major trade route maps until AD 900.

All of the archaeological, forensic evidence is crying that Mecca did not even exist as a city in Mohammed’s lifetime. So, 1. why does Mecca the most important city in Islam have no history going back to the 7th century?   2. Why is Mecca mentioned only once in the Quran?  3. Why is Mecca not found on the earliest maps until AD 741?  more than 100 years after Mohammed’s death in AD 632? 4. Why does the lack of archaeological evidence say that Mecca was not a great city in Mohammed’s lifetime, as Islam claims?  Because the strongest evidence shows that Mohammed and   the worship of Allah originated in Petros not Mecca. When you follow  the footprints in the sands of time and let them speak for themselves, they point in the opposite direction. To say that Abraham along with Ishmael lived in Mecca and built the Kaaba there, if true,  would be all through the Old Testament, But not a word, not a mumbling world. To say the above is ridiculous is an understatement.

The  tale is told that Abraham went to the Kaaba in Mecca and destroyed all the 350 pagan idols there. The leaders of the city took him and threw him a fiery furnace from which God delivered him.  While the story is not in the Bible, it sure sounds like it was hodgepodge of Shadrach, Meshach, and Abednego.

Islamic scholar Jay Smith holds the view that the role Mecca played in the history of Islam is nothing more than a fabrication promoted by Caliph Abd al- Malik (685-705) The fact that it is mentioned only once in the Quran ( Surah 48:24) is very suspect.

Qiblas (The qibla wall is the wall in a mosque that faces in the direction of  Mecca.)

Why is Mecca Mentioned only once in the Quran. Why is there is no place in the Quran where it is stated to make a Qibla facing Mecca, nor  to pray towards Mecca. Satellite evidence shows that early Mosques pointed their Qiblas toward Petra for the first one hundred years and not toward Mecca (cf. Surah 2:145-149). It cannot be proven that Mecca even existed until 725 and Mohammed died in AD 632.

In the earliest Mosques they did not have Qiblas  but the largest wall faced the place of Prayer. Surah 2:149-150 reads,

Although Mecca is not precisely mentioned you cannot help but wonder why not. If it was always the most sacred site and  city in Islam. It is doubtful that Mecca was even a viable city in Mohammed’s lifer time.  It is not mentioned on the earliest maps until AD 741 more than 100 years after Mohammed’s death in AD 632.

Why is Mecca mentioned only once in the Quran?  3. Why is Mecca not found on the earliest maps until AD 741?  more than 100 years after Mohammed’s death in AD 632? 4. Why does the lack of archaeological evidence say that Mecca was not a great city in Mohammed’s lifetime, as Islam claims?

Archaeologist Dan Gibson who visited over 100 mosques found them facing Petra, Jerusalem,  Mecca and somewhere in between.  This was  not due to what the Quran said, but due to Politics.  Each  powerful Caliph was trying to manipulate Islam at the time of his rulership to benefit his expanding empire.

The question  than arises why do most of the early Qiblas (niche in a wall) prior to  772 AD   face  Petra and not Mecca. 1. An earthquake destroyed Petra in  713 AD…   2. In AD 749 after the Abbasids Muslims defeated the Umayyads Muslim, the Abbasids moved the capital of Islam from Petra to Mecca. And so  gradually mosques were built facing Mecca. The Dome of the Rock Qibla has been  facing Petra since  691 AD… The Al Aqsa mosque is also facing Petra. This shows that Mecca was not the original birth and holy place of Islam.

The fact carved in stone remains that the Dome of the Rock built in AD 691 in Jerusalem   faces Petra not Mecca. And it also makes the first mention of Mohammed and includes  the first Quran inscription. This raises  a lot of questions about the authenticity of Mecca as being the birth place of both Mohammed and Islam.  Like not until AD 727 almost one hundred years after Mohammed’s death were all mosques facing Mecca.   All  mosques are not facing Mecca until 822 AD almost 200 years after  Mohammed’s death.

In Islam we are told that Abraham and Ishmael built the Kaaba shrine. But gradually the natives of Mecca corrupted it. Pagan Meccans ran around the Kaaba seven times because they worshipped seven planetary deities, the sun, and the moon plus five planets. We are told that after Muhammad entered Mecca in 630, he destroyed  all the idols and pagan gods that were worshipped in the Kaaba shrine. (Some say it was on December 11, 629 AD.).  Today devout Muslims walk around the Kaaba seven times during their Hajj pilgrimage which comes right out of paganism.

The Quran says that Alexander the Great was a devout Muslim when history tells us he was a total polytheist pagan (Surah 18: 84-86).

It’s enough to make you feel  Sttrraanndded in a wasteland of quicksand where nothing is steady or  secure under your feet.

Next article, we will put the spot light on  Mohammed The Man The Prophet