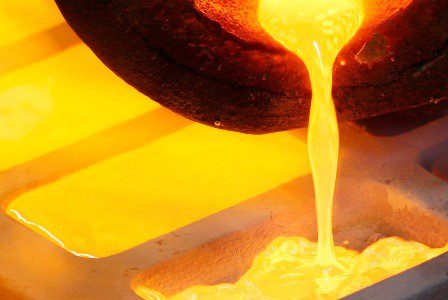 A Faith Those Costs Nothing Is Worth Nothing

“But God demonstrates his own love for us in this: While we were still sinners, Christ died for us”   (Romans 5:8 ~NIV)
Have I got a deal for you.

Give me your gold, and I will give you some iron.

Any takers? I thought not. Still, history records a moment when people did exactly that.

The time was the 19th century and the Prussian ruler, Frederick William III, was at war. It was a war that was difficult to sustain since his treasury was empty, and there were no resources available to replenish the empty coffers.

After careful thought the monarch decided to approach the women of his country and ask them to bring their gold and silver jewelry to be melted down, so it could be made into money. Frederick also resolved that for each gold or silver ornament given, he would present the donor with a bronze or iron decoration, as a token of his gratitude. Each decoration would bear the inscription, “I gave gold for iron, 1813.”

The response was overwhelming. It is a matter of history that it became unfashionable for women to wear any other ornament other than a cross of iron. That instance being noted, I can’t think of any other time when people have traded their valuable gold for worthless iron.

A life that costs nothing accomplishes nothing.

George Washington gave up a chance to being, a king, William Wilberforce sacrificed political power to fight slavery. Eric Liddell was willing to sacrifice a gold medal to honor the Lord’s Day. Dietrich Bonheoffer gave up his life to resist the Nazis.

Fifty-six men signed the Declaration of Independence. Their conviction resulted in untold sufferings for themselves and their families. Of the 56 men, five were captured by the British and tortured before they died. Twelve had their homes ransacked and burned. Two lost their sons in the Revolutionary Army. Another had two sons captured. Nine of the fifty-six fought and died from wounds or hardships of the war. Carter Braxton of Virginia, a wealthy planter and trader, saw his ships sunk by the British navy. He sold his home and properties to pay his debts and died in poverty.

At the battle of Yorktown, the British General Cornwallis had taken over Thomas Nelson’s home for his headquarters. Nelson quietly ordered General George Washington to open fire on the Nelson home. The home was destroyed and Nelson died bankrupt. John Hart was driven from his wife’s bedside as she was dying. Their thirteen children fled for their lives. His fields and mill were destroyed. For over a year, he lived in forest and caves, returning home only to find his wife dead and his children vanished. A few weeks later, he died from exhaustion.

Of course, the greatest sacrifice in history is far more remarkable.

“For you know the grace of our Lord Jesus Christ, that though he was rich, yet for your sake he became poor, so that you by his poverty might become rich. “ (2 Corinthians 8:9)

One would think humanity would be most appreciative for this unprecedented act of love. But rather than applauding and accepting God’s gift humankind hated Him, tried Him, beat Him, whipped Him, mocked Him, and murdered Him.

Jesus gave us something more precious than gold; He gave us his life, His blood. Instead we gave him a wooden cross where iron nails were driven into his hands and feet, and iron spear was driven into His side. So that one day we may walk on streets of gold with Him.

Instead of giving gold for iron that the country’s empty coffers might be replenished; let us pray for America that its Christian values will be restored; let’s do a far greater thing let us Pray for America that it will be a God-fearing nation once again.  “The fear of the Lord is the beginning of wisdom.”

Let me close with this prayer given by America’s Pastor 92-year-old Billy Graham:

“Heavenly Father, we come before you today to ask your forgiveness and to seek your direction and guidance. We know Your Word says, ‘Woe to those who call evil good,’ but that is exactly what we have done.

We have polluted the air with profanity and pornography and called it freedom of expression. We have ridiculed the time-honored values of our forefathers and called it enlightenment. Search us, Oh God, and know our hearts today; cleanse us from sin and set us free. Amen!”