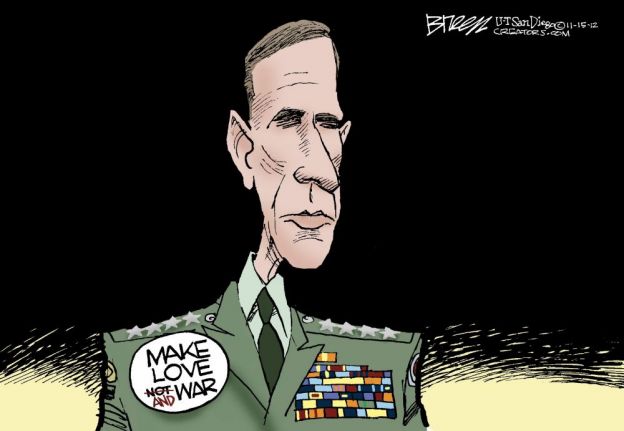 After reading the life story of General Eisenhower and other generals I know that Petraeus has not started a new trend here. However, we are all well aware that national security can be lost and secret information gained by a beautiful and intelligent blackmailing spy.  Whether or not Paula Broadwell, his biographer and mistress, had access to classified information is something that has not come to light yet.

Journalists don’t impress me much anymore with their sex-scandal stories and whether head should roll.  They sure didn’t think Bill Clinton had to resign after he lied under oath about his rendezvous’ with Monica Lewinski. His nights with the naughty ladies in the shady lanes, while he was in public office are legion. Evidently, Petraeus’ escapades were fewer and more sporadic.

The late Sen. Edward Kennedy’s sexual jaunts were as well-known as that of Henry VIII and he wasn’t forced to resign. In fact, he repeatedly won reelection, despite his Dionysian festivals.  The sexual practices of numerous Republican and Democratic politicians are tabloid; some were forced to leave office, others hung on and have survived because they have no shame or because some counties and constituents hold lower social standards for their public officials than others.

We all know that pre- and extramarital activity is commonplace in high places where human nature is as fragile as pride and glory. Most spouses don’t tolerate adultery very well. The fallout is often devastating to a family for a life time. Many (“We the people” ) feel that if you can’t keep your own house in order; if you can’t keep your own backyard clean; if you can’t keep your promise to your spouse;   why should I trust you taking care of me and mine and keeping your oath of office. Like someone said, Lets measure people by the ‘content of their character’ and ‘the merit of their actions’ (and not prestige of their office.)   Character is tested in soft and easy situations as much as it is in hard and difficult situations.

Samson was strong enough to kill a lion with his bare hands and brave enough to face a thousand Philistine with the jaw bone of a donkey but he was a weakling before the winsome ways of Delilah. His fame was turned into shame and to this day he is remembered as a loser rather than a winner.

That’s Something To Think About.