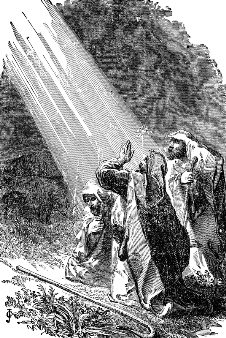 This intriguing encounter occurred during one of Israel’s periods of apostasy and servitude, when the people had been ruled for 40 years by the pagan Philistines. There was one godly couple in the tribe of Dan, however, who evidently had long been praying for a son, and God finally answered their prayers. “The angel of the Lord” came to give the good news to Manoah and his wife. The remarkable son who was to come was mighty Samson, who later would free his people.

But it is the Angel Himself who is most intriguing here. His name was “too marvelous even to comprehend.” The same word is translated “Wonderful” in Isaiah 9:6, where it is cited as a name of the coming divine Son, whose name would also be “mighty God” and “everlasting Father.”

This “angel of the Lord” was thus none other than God the Son in one of His rare pre-incarnate appearances, or theophanies, when the invisible God manifested Himself visibly to man. There are many created angels (Hebrews 12:22), or “messengers,” of God, but on certain occasions, this One who is called “the angel of the Lord” (also “the angel of his presence,” as in Isaiah 63:9, and “the Angel which redeemed me,” as in Genesis 48:16), is clearly none other than God Himself. In such cases, it could only have been the pre-incarnate Christ, for the Bible says: “No man hath seen God at any time; the only begotten Son, which is in the bosom of the Father, he hath declared him” (John 1:18).

God had already revealed Himself in this way to great men of God, and now even to an unknown couple. Eventually this Angel, whose name is Wonderful, “was made flesh, and dwelt among us” (John 1:14), and will one day dwell with His people forever (Revelation 21:3).

That Is Something Wonderful To Think About!