Thankful In All Things 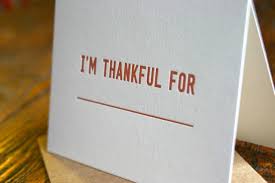 He who cannot think of something to be thankful for has a very poor memory.

This verse says that it’s God’s will for everyone who believes in Jesus to be thankful. There are some things that happen in our lives that we are truly thankful for. We are thankful for birthdays, weddings, love, and family, health, finances. But some very unpleasant circumstances can happen in our lives as well. We might have an illness, the death of a loved one, a broken relationship, a serious car accident. How can God expect us to be grateful for those things? But look closely at what I Thessalonians 5:18 is really saying. Some might think that this verse says to be thankful FOR all of our circumstances. But the verse actually says to be thankful IN all our circumstances. The original Greek word for IN that is used here means “in the middle of” or “during.”

And most of all, we should be thankful because God gave His Son, Jesus, to save us from the punishment of our sin, and give us new life! (1 Corinthians 15:57) God saves all who believe in Jesus; He has taken our sin and given us His righteousness.

Throe are few things that are more irritating that a thankless spirit; even Shakespeare referred to it as ‘sharper than s serpent’s tooth.”  Several days ago I was with a friend and we were caught in a traffic jam. He gave a motorist a break allowing him to get into the flow of traffic; the thankless motorist didn’t acknowledge his favor with even a nod of his head. It was as if he deserved the favor. My friend verbally responded in not so gentle a manner. Make no mistake about it: when someone goes through like with a thankless spirit, looking down on others as if they ‘deserve’ the favor; they are going to have a bumpy road through life; for no one appreciates someone with a thankless spirit!  God is not the exception here. You should always take the time to thank Him for the good things you have in life no matter what the other unpleasant circumstances there may be.

The Bible says that being thankful brings honor to God.   “Whoever offers praise glorifies Me; And to him who orders his conduct aright I will show the salvation of God.”(Psalm 50:23).

God actually commands us to be thankful. Back in the Old Testament, there were certain sacrifices that people were instructed to make as thank offerings to the Lord. When we thank God, we acknowledge our dependence upon Him and what He has done for us that we could not do for ourselves. When others see you thank God, you point them to Him.

Giving thanks also helps us, because it makes us focus our attention back to the One we are thanking! Giving thanks is like putting on spiritual eyeglasses that help you focus on God. It will remind you that God is in control of everything. He never changes and He only allows what is best for you. When you have FAITH in God’s goodness, you do not FEAR the things around you. No matter what is happening in your life, give thanks to God in the middle of your circumstances.

I think the Pilgrims who landed on our not so friendly northern shores over 150 years ago are a prime example of being thankful IN all circumstances. In 1620, a group of 102 passengers set sail for the New World. These people were citizens of England who called themselves Separatists.(They were also called Pilgrims.)  The Separatists wanted to live in a land where they would be free to worship God the way they believed God wanted them to. In those days, there was only one kind of church in England. Everybody went to the same kind of church. And that church was not doing a very good job of teaching the Bible and connecting people to God. So the Separatists “separated” themselves from the Church of England, and they risked everything to go to the New World or America.

The brave Pilgrims spent three wet, drippy, cold months at sea aboard their ship called the Mayflower. They arrived in America on December 21. According to the journal of Governor William Bradford,  as soon as the Pilgrims landed safely ashore, “they fell upon their knees and blessed the God of heaven, who had brought them over the vast and furious ocean.”

Even though the journey had been life threatening and they were facing an even more uncertain future, the Pilgrims thanked God for bringing them this far.

It was the dead of winter in the ice-cold northeast. The first thing the people did was to build a building where they could worship God together. The families had to live on the wet, drafty Mayflower while the men tried to build houses. Their lives were on a  razor’s edge from one day to the next. There were no stores where they could buy wood, tools, or food. And in the middle of winter, they could not grow food in the frozen ground. The Pilgrims were constantly hungry and cold. Soon, sickness came, but there were no hospitals where they could go to get well. The Pilgrims began to die. By the end of winter, nearly half of them had died.

Can you imagine, if you and your family had been part of the Pilgrims? What if you left everything you knew to go to an untamed foreign land so you could worship God, and within the first few months, half of your family died? Do you think you could still be thankful to the Lord?

The Pilgrims prayed continually for God’s help and guidance. One day in March, during a church service, God sent a big answer to their prayers. In walked an Indian chief named Samoset. He saw the Pilgrims’ serious needs and came back with an Indian helper name Squanto. Before this time, the Pilgrims had been terribly afraid of the Indians.

Squanto spoke English! He had been captured before by earlier explorers and taken to Spain to be sold as a slave. He escaped to England where he learned to speak perfect English. A kind Englishman had paid for his voyage to return to his homeland, and now he was here to help the Pilgrims. Here we can see the providential hand of God in the journey of the Pilgrims; and how He can make all things work together fore the good and in answer to the prayers of His people.  It was a critical time in the settlement of America. One can only imagine how shocked and blessed   these first settlers felt when they saw and heard a native Indian walking out of the forest and began to speak English to them. In the words of the Pilgrim’s leader, Governor William Bradford, “Squanto became a special instrument sent of God for [our] good.” It was divine providence.

We can draw a comparison between Squanto’s life and that of Joseph’s in Genesis 37-45. Joseph was captured and taken to a foreign land, where he was taught a foreign language and was prepared by God to feed His people.

The following fall, their harvest was plentiful. Governor William Bradford declared a day of giving thanks to God, which would be held in October. He invited a friendly Indian neighbor to join them at the feast.

When this Indian arrived, he brought 90 additional Indians with him! The Pilgrims didn’t know how they would feed that many guests, but the Indians had brought 5 deer and a dozen wild turkeys to eat. The Pilgrims prepared vegetables such as carrots, beets, cucumbers, and turnips. The Indians taught the Pilgrims how to make cornmeal pudding and how to toast kernels of corn until it popped!

But the hardship didn’t end there. The next winter was incredibly harsh and difficult. In November, another ship, called The Fortune, arrived. On board were 35 more settlers. These people arrived with no food, no warm clothes, and no other supplies. The Pilgrims would have to share what little they had. At one point, each person was only allowed to eat 5 kernels of corn per day! Can you imagine having less than one spoonful of corn per day?

The following summer, there was a 12-week drought.  The crops were dying, and Pilgrims desperately needed God’s help. The Pilgrims fell to their knees and prayed for 8 hours.

Do you think God heard their prayers?   God always hears our prayers. “The LORD has heard my supplication; The LORD will receive my prayer” (Psalm 6:9).  And God’s answer was incredible. It started to rain, and it didn’t stop for 14 days! The harvest was saved. To celebrate, the Pilgrims had a second day of giving thanks to the Lord.  Again, the Indians were invited to the feast. This time, 120 Indians came to celebrate with their Pilgrim friends. Again, they prepared deer and turkey, fruits and vegetables.  “Only this time one dish was different. The first course, served on an empty plate in front of each person, consisted of 5 kernels of corn, a gentle reminder of God’s faithful provision for them.”

This helped the Pilgrims remember that it was only by God’s grace that they had the bountiful harvest. No amount of hard work or skill could have produced a good crop without rain. Only God could bring the rain that they needed!

We can learn so much from the Pilgrim’s example. The Pilgrims faced so many difficult situations. They faced hunger, sickness, freezing weather, and even death. However, they remembered the most important thing: God was in control. By thanking God for His grace and blessings during their hard times, they honored God and kept their focus on Him. They offered thanks to God every day, and He gave them the grace they needed to survive and thrive, and build a new country.

No matter what things are happening in your life, give thanks to the Lord. His grace is abundant, His love for you lasts forever, and He gives new life to everyone who trusts in His Son.

Also, learn to be thankful in-during unpleasant circumstances.  As pilgrim, brother, governor and awesome leader William Bradford said in his journal, “Thus out of small beginnings greater things have been produced by His hand that made all things of nothing, and gives being to all things that are; and, as one small candle may light a thousand, so the light here kindled hath shone unto many, yea in some sort to our whole nation.”

Be thankful in all circumstances, for this is God’s will for you who belong to Christ Jesus. –       1 Thessalonians 5:18 NLT

He’s Only a Prayer Away