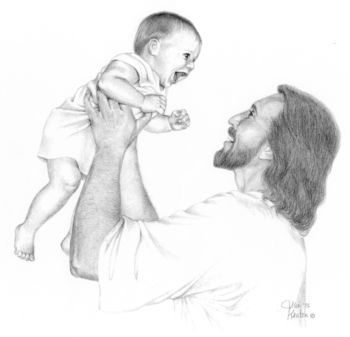 Jesus is the Greek form of the Hebrew name Joshua, meaning “Jehovah is salvation.”  Jesus is also called Christ, from the Greek word christos. meaning messiah, anointed one of God, Savior.

No other man, born of woman, has left His name so indelibly imprinted on the minds of men, and been the subject of so many written words and discussions, as Jesus. Most of what we know about Him  comes from the four gospels, yet here we are two thousand years later still talking about Him; the reason being of course that his life touches not only time but touches eternity.

He is God, He is Man, He is King, He is Savior, He is Lion, He is Lamb, He is the Name  above all names, He is the Light of our lives, He is the Bread of Life, He is the Sun of righteousness, He is the Rose of Sharon and the Lilly of the valleys, He is the Bright and morning star, He is the Wonderful counselor, and the Prince of peace, He is the Captain of our salvation, He is the  one in whom we live, move, and have our being. He is the Word made flesh. He is Emmanuel – God with us. In Him is the fullness of God. He is the Alpha and He Omega, He the Beginning and the End, He is the First and the Last. All Authority in heaven and earth has been given unto Him. He is the Highly Exalted One, and the Heaven of Heavens declares his majesty? All the blessings that we now enjoy are because of the work He has done. He’s the complete story of what life is all about.

Before He ascended up into heaven he made this promise, “And when two or three of you are together because of me, you can be sure that I’ll be there.” (Message Bible)

Certainly you can go to a beautiful church where thousands of people are gathered and find Jesus there; but that is not the complete story.  As we turn the pages of the gospels we see him walking dusty roads for hours on end to meet people in need; we see him picking up little children and blessing them; we see him eating and drinking with friends; we see him in pain and sorrow; we see how he refused to join any exclusive admiration societies and that he owned very few possessions; we see that he did not judge people on the outside but by their genuine faith in God.

He was born in a borrowed manger, rode a borrowed donkey and was buried in a borrowed tomb and blessed the highest and the lowest in society who desired to turn back to God. He was no respecter of persons; however, most of his associates were from the losing class. He had a former Roman tax collector, a political zealot, and feisty fishermen on his staff. He preached to prostitutes and  snake in the grass criminals. He laid healing hands on people with leprosy that others would not touch for fear of becoming ceremoniously unclean. He laid hands on blind people who came back to him running and giving praises to God. He laid hands on crippled people who threw away their crutches and took to dancing and leaping  and praising God. He felt more comfortable amongst the poor and the  least than amongst the elite, whom he seemed to trust very little. Perhaps because he knew that one day they would cast him aside like an old worn out shoe for the sake of their own religious advancement and political careers. But like  a laser beam he saw through their loveless kisses and phony praises and their layered Ponzi schemes. He saw them for what they were:  emperors without cloths, spiritually wretched and poor and miserable and blind and naked.

It’s like reading a Charles Dickenson novel; you quickly see that these elitists did not care for the poor like he did.  They did not want to see the ugly side, the dark side of society. The downtrodden were a nuisance to them. They did not want to see their running sores and rotten teeth, hear their crude expressions, and smell their odorous bodies. They did not want these unwashed slum dwellers with their grubby hands to touch their spotless robes.   They did not want to listen to their heart breaking stories of hunger and disease and desertion and homelessness and injustice; yet they claimed to love God and to be his darlings because they had connections in high places, money in the bank and able to read the classics; but their religion was all in their mouths. Jesus was the very opposite of such holier than thou inch deep mile long phonies.

While Jesus is meek and mild he is also very tough. While he is the Lamb of God to those who love him, he’s the Lion of the Tribe of Judah to those who wish to push him out of our daily lives and off of the stage and pages of history. That happened once, only because the first time he came to redeem us from our terrible; but it will not happen a second time. The next time he’s coming back to stay and it will be center stage with all the lights shining on HIM!

That means that He doesn’t play hide-and-seek with us. He’s not remote; he’s near, he’s only a prayer away. You can prove that to be true right now by inviting him into your heat no matter where you are. He will in a flashing, illuminating moment make you his own son or daughter.

It’s over 2000 years now since Jesus ascended up to heaven and now we are awaiting for the glorious morning of his return.  That event, yet to come,  will be a new dispensation for planet earth. But in the meantime we are here with our feet planted firmly on terra firma; and  regardless of where we are, be it in an office and airplane a prison cell our kitchen or a factory he is there waiting for us to reach out to him.  He still lives, He still forgives, and He still sets sinners free.

By Faith You Can Reach Out and Touch Him Right Now.