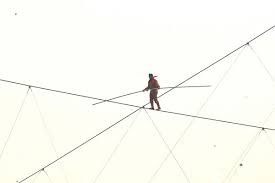 Courage Is Often A Silent Thing.

“And the king (Herod) was exceedingly sorry; but because of his oaths and his guests he did not want to break his word to her. And immediately the king sent a soldier of the guard and gave orders to bring his head. He went and beheaded him in the prison, and brought his head on a platter, and gave it to the girl” (Mark 6:26-28).

King Herod was brave physically but morally he was a coward, thus the term “moral coward.” It is amazing to read stories of soldiers brave enough the rush into a line-of-fire, putting life and limb on the line, but become mere wimps when it came to being laughed at by their fellow comrades in arms

When physically brave King Herod was confronted by the public request of his wife and immoral daughter-in-law to behead John the Baptist, he was suddenly forced to make an unpopular, moral decision; the hardened soldier melted into a jellyroll.

King Herod was so awe-struck by John the Baptist’s preaching that he went out into the desert to hear him roar like a reforming lion. He believed John the Baptist to be a righteous prophet and secretly respected him (Mark 6:20). But Herod lacked moral fortitude. He was a moral sissy.

We have here a study in contrast between physical courage and moral courage. On the one hand we have John who with great moral strength stood up for the truth in the face of death. On the other hand we have King Herod who acted out of weakness, and sacrificed the truth on the altar of public admiration. At all costs his fellow banqueters must not be displeased with him. Being politically correct was more important than being morally correct.

Oh what crimes have been committed to gain public applause, to avoid public shame, civic humiliation.

Herod suddenly found himself caught in the undertow of conformity and he went down with it like a stone.  He went along with what the crowd wanted, because that was more important to him than what God wanted.  Herod buried his head-in-the-sand while John drew a-line-in-the-sand.

We find  examples ad infinitum … of this among those who call themselves follower of Christ. Instead of having the courage at an office party to refuse an alcoholic beverage or walk away from a filthy joke, or stand against abortion or homosexuality, they will instead, conform, laugh, wink, stomp, even immoderately dress… go-along to get-along. Their moral wimps, sissies: not profiles of courage: not light in a dark place; ashamed of Christ.

They live a worldly life, because those with whom they live live that way. They do what they themselves know to be incorrect, because that is what everybody else is doing, and they do not want to stand out or be different from them. They are little King Herods, or little Miss Queen Herodias’; either way, they are cowardly conformers, ashamed of Christ or have simply forgotten His great love for them.

In His Great Love,