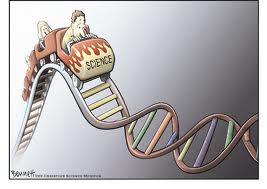 In this article I wish to show you that Christianity is not the enemy of science. In fact science was born in the womb of Christianity. The vast majority of all scientific development has come out of western civilization, which had Christianity as its base. It can be said that Christianity has produced more literate and educated people than any other movement in the history of mankind. For example, in America all but 3 of the first 126 colleges established in the United States were built in order to propagate the Gospel of Jesus Christ.

For some hard shelled secularists who know almost nothing about the influence of Christianity this awakening comes upon them like a bucket of ice water.  But it is what it is! Shock number one: most of the early scientists were Christians (Copernicus, Galileo, Pascal, Isaac Newton, Carl Linnaeus, Johannes Kepler, Robert Boyle, Louis Pasteur, Jean Henri Fabre, Michael Faraday, John Ambrose Fleming, etc.). The faith of these great scientists was not a separate part of their thinking; indeed, it was integral to their thinking. It was their blood stream.

Why was science born in the cradle of western civilization and not anywhere else? The answer really is very basic. Christianity from its very beginning viewed God and His creation as rational and orderly and thus could be examined. Nature in the Christian view (as compared to non-Christian worldviews) was no something to fear and certainly not to worship.

The idea of laws of nature came from Christianity. And the concepts of subduing nature and being stewards of nature come right out of  the first book of the Bible—Genesis.

Why didn’t the Greeks develop modern science? They certainly had the thinkers to do so; The Pythagoreans discovered the laws of harmony and vibration of strings. Plato was a genius and a first rate mathematician. Aristotle developed logic and collected a multitude of facts. Euclid produced geometry. Other great Greek thinkers’ were Archimedes, Apollonius of Perga, Nichomacus of Gerasa. Yet  such towering intellects of logic and mathematical ability,  never developed any empirical (experimental) science

Here is the simple fact:  It was because of their wrong understanding of the nature of God. The God of Plato was a craftsman not a creator. His God did the best he could with what he had to work with. But you could not predict how they would turn out. (sort of like a potter with the clay) There were a whole lot of plusses and minuses. . It was too arbitrary. To Plato you could have a science of ideas but not of things. What we call “the real world,” the physical world could not be figured out.

Aristotle who followed in the footsteps of Plato (and whom the Church of the Middle Ages adopted as their philosopher) did not believe in a Creator -God. Aristotle’s God was the ultimate Form that reacted upon the (eternal) matter and thus produced everything in the world. Aristotle taught: There is no use trying to understand things; they cannot be understood because they have a meaningless core.

The Greek atomists took a guess and did a little better. Epicurus believed in a world of chance, random atoms came together by chance to randomly create everything that is in existence. Heraclitus believed that all things are in a perpetual state of flux, so that no knowledge of them is possible.

That is why the logical-mathematical Greek mind did not study nature in the way Christianity did, because of two totally different beliefs on the character of God. The Greeks were on the right road but did not have the divine revelation of the Word of God that declares our world as orderly and rational. No one is foolish enough to seek for order where they are convinced that there is no order.

Science could not have begun in the Buddhist or Hindu worlds either, for much the same reason.  The essence of these two religions is that the physical world has no reality, that it is an illusion. Scientific inquiry requires the assumption that the world is real. No one is foolish enough to seek for order which they are convinced is an illusion.

Nor could science have begun in the Muslim world because that worldview is dominated by fatalism, and fatalism is antithetical to the concept of progress. While Muslim scholars excelled at practical learning such as geography and astronomy, they did not develop science in the sense of explanations of why the physical world works the way it does. This was in part because Muslim thinkers taught that seeking explanations of physical processes was either not possible or inappropriate. It was argued that the very idea that natural laws exist was blasphemous because it denied Allah’s freedom to govern the universe as he saw fit. Indeed, Muslims who might challenge the Quran with scientific thinking were considered infidels and it was obligatory for all good Muslims to kill infidels.

Genesis 1:1 is the code key that unlocks the door to the origin of the universe. “In the beginning God created the heaven and the earth.” In Genesis 1: 26-31 man is given the authority by God to “subdue” or take charge of the earth. Christianity believes the world is an orderly place because it was created by a rational God, a God of amazing order and wisdom.

From the Bible, Christians also came to believe that man is rational because his creator is rational. (although in a much more limited way).   It is because man is made in ‘his image and likeness’ that he can think God’s thoughts. It is not accidental that science developed in those lands where the Bible was most freely read.

The Bible was not written as a science textbook. But, when the Bible does reveal truths related to science, the Bible can be trusted. Indeed, the Bible demonstrates scientific knowledge and concepts far before mankind had developed the technological base for such knowledge.  But modern day scientists tell us that the bible had it right all along, that the universe had a beginning via a primordial explosion of energy and light.

Dinesh D’Souza in his book What’s So Great about Christianity writes;

“The Big Bang resolves one of the apparent contradictions in the book of Genesis. For more than two centuries, critics of the Bible have pointed out that in the beginning—on the first day—God created light. Then on the fourth day God separated the night from the day. The problem is pointed out by philosopher Leo Strauss: ‘Light is presented as preceding the sun.’ Christians have long struggled to explain this anomaly….but it turns out that there is no mistake. The universe was created in a burst of light fifteen billion years ago. Our sun and our planet came into existence billions of years later. So light did indeed precede the sun. The first reference to light in Genesis 1:3 can be seen to refer to the Big Bang itself. The separation of the day and the night described in Genesis 1:4 clearly refers to the formation of the sun and the earth. Day and night—which we experience as a result of the earth’s rotation—were created much later than the universe itself. The Genesis enigma is solved, and its account of the creation is vindicated not as some vague parable but as a strikingly accurate account of how the universe came to be.”

Science is exciting even breath-taking but its study of nature cannot outgrow its creator. Nature is the first step in revelation knowledge, but God’s Word gives a fuller and more excellent knowledge.

Psalm 8:6, “You have made him to have dominion over the works of Your hands; You have put all things under his feet.”

He is Only A Prayer Away: