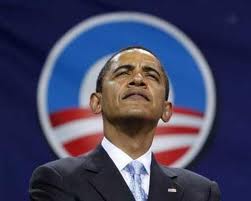 Nearly every time President Obama delivers a “major speech“about the economy and creating new jobs, something bad happens. Every time he speaks, the next day, the Dow Jones Industrial Averages fall like a stone. This president is such a prisoner of his leftist ideology he seems incapable of change. He reminds you of a lost motorist too stubborn to admit he’s wrong and won’t ask for directions. Like Rodin’s Thinker, this guy hasn’t moved an inch in three years.

How many more of these speeches must we endure before everyone realizes his ideas and proposals aren’t working? I am tired of hearing his refrain, “Let me be clear!”  The Rose Garden political posturing is enough to make you throw your hands up in despair.   In a 2009 speech, the president promised his stimulus policies would create 3 to 4 million new jobs by the end of 2010. The inconvenient truth according to Heritage Foundation calculations and U.S. Department of Labor, Bureau of Labor Statistics figures is that he hasn’t even come close. His promises are as mythological as a bed time story. The hard nose reality is that there has been a deficit of 6.7 millions jobs since the recession began. He deserves the Pinocchio of the Year Award.

Why such blindness to the glaring facts? The reason is because he’s a theorist. That’s because he has never worked in the real world with people who create real jobs. He operates on theories and an ideology that is incapable of achieving his goals. But in academia, as well as in government, being wrong rarely disqualifies one from a leadership post. Intentions are all that matter.

Example: He speaks mostly of redistributing wealth, not creating wealth. He wants us to hate the wealth creators, rather than follow their example. The result has been a growing dependency on government, robbing too many of their liberty and opportunity.

Like the floodwaters that have devastated the northeast, the federal government has overrun its constitutional limits. It should not be spending and borrowing more, but less.

How many savvy business people would put most of their hard earned dollars on the line by signing a contract first and finding out what’s in it latter? It’s madness!

Ask yourself: If the federal government has made such a mess of Medicare and Medicaid (not to mention stretching Social Security to the breaking point) what reasonable hope is there that it will do better with an even larger national healthcare monstrosity? That’s about as sensible as   reading a fortune cookie and betting your life on it.

There was a time in America not too long ago when people mostly looked out for themselves and their relatives. Parents cared for their children when they were little and the children returned the favor when their parents got old. Now we dump the kids in day care and they return the favor by dumping their elderly parents in nursing homes. The Fifth Commandment about honoring your mother and father was once taken seriously. Now it’s the government’s responsibility because too many think we are constitutionally mandated to be free of “burdens.”

If we want government to become smaller and perform within its constitutional boundaries, we are going to have to expect less from it and more from ourselves. President Obama understands none of this because others have largely aided him throughout his life and unremarkable pre-presidential career. He has great oratory, but little substance, the tragedy is he has learned nothing from failure.

Hopefully, the leopard can change his spots.

This is the kind of change you want to believe in!