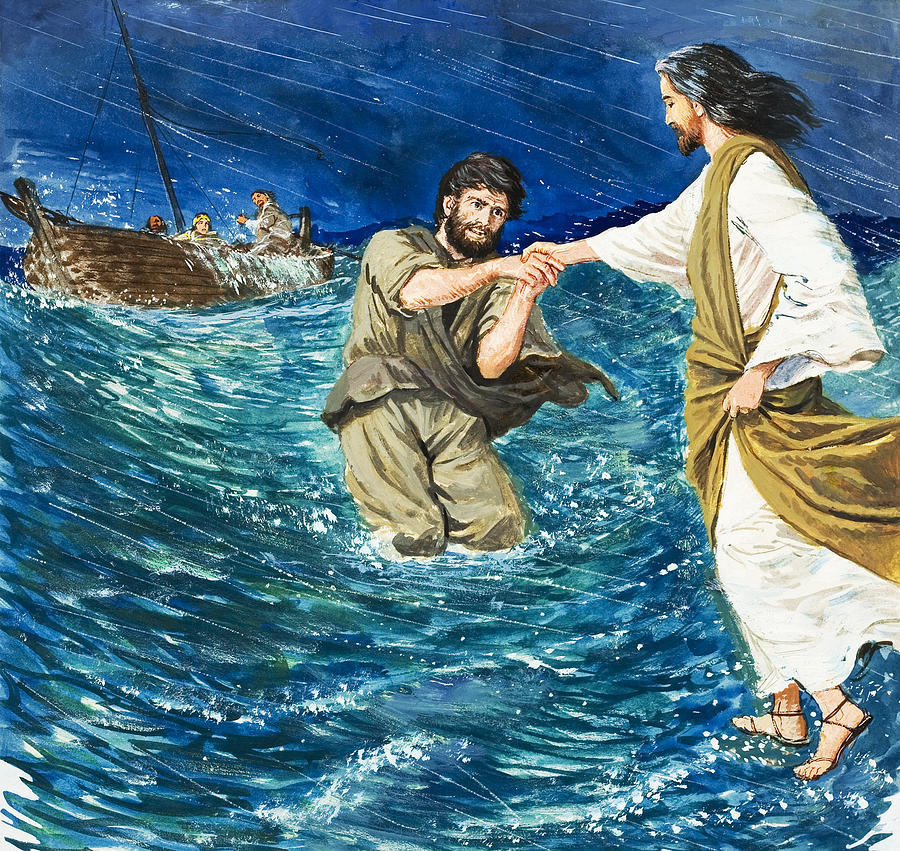 No One Is Omnipotent Enough To Know That Miracles Are Impossible.

Before his death Thomas Jefferson completed his own version of the New Testament now entitled “The Jefferson Bible. In it he deleted all miracles.  He ended his translation with the phrase: “there laid they Jesus, and rolled a great stone to the door of the sepulcher, and departed.” However, according to a national   survey, nearly 75% of Americans believe that the miracles of the Bible took place.

But the enemies of the gospel never relent for long.  Next to the miracle of the resurrection of Jesus the miracle they still pounce on the most is Jesus walking on the water.

I think I’ve heard them all. Some argue that Jesus wasn’t actually walking on the water but was standing at the lake’s edge in a shallow place. Because the night was cloudy and dark, the disciples only thought they saw Jesus stride across the sea, when actually He didn’t. Others have fancifully argued Christ actually walked across a series of stones in the middle of the lake.

Consider Israel being delivered out of Egyptian slavery by ten amazing miracles, such as walking through the Red Sea without getting their feet wet.  In the wilderness gave them water out of flinty rock, sent manna down from heaven and provided them with a pillar of fire by night to keep them warm and a pillar of cloud by day to keep them cool; yet there remained those  wide-eyed Nietzschites  who would trade it all in for a golden calf. Like Judas who  heard all of Christ’s sermons and saw most of his miracles and yet betrayed him for thirty pieces of silver. .

It’s hard to believe any such theories and scoundrels are ever taken seriously. Yet they often are. Why? Why is it so incredibly hard for some to believe the obvious — a miracle took place? Partially it’s because in this scientific age some people feel we’ve outgrown the idea of miracles, that there nothing more than silly superstitions.

But wait a minute; what makes us feel that some of the people in Jesus’ day weren’t skeptical too?   Nicodemus, a highly educated man in his day, was skeptical. Yet it seems it was the miracles of Christ that drove him to seek a meeting with the Savior by night to try and resolve his many questions (John 3:1, 2). Certainly Thomas was skeptical concerning the miracle of the resurrection. “Unless I see in His hands the print of the nails, and place my hand in His side, I will not believe,” he said (John 20:25). So the people of Jesus’ day were no less skeptical than many are today.

Yet they couldn’t avoid the inescapable, irrefutable evidence of Jesus’ miracles. He healed leprosy, paralysis, a withered hand, deaf and dumbness, blindness, a severed ear, hemorrhaging, and dropsy. He turned water into wine, stilled a storm, caused a supernatural catch of fish, multiplied food, and dried up a fig tree. He raised a man’s daughter, a widow’s son, and Lazarus from the dead. Interestingly, even the critics of Jesus’ day didn’t deny His miracle-working power. Instead they wanted to kill Him before everyone believed in Him (John 11:48).

Moreover, apologist Josh McDowell writes: “[W]e must remember that scientific laws neither dictate events nor do they explain them. They are merely a generalization about observable causes and effects …. The proper way of determining if something happened is not whether we can explain it. The first question to be asked is not can it happen, but rather did it happen …. If an event can be determined as having happened, yet it defies explanation, we still have to admit that it happened, explanation or not. The evidence for biblical miracles is as powerful historically as other historical events (such as the fall of Rome and the conquests of Alexander the Great). Just because miracles are outside our normal daily experience does not mean they have not occurred and do not occur.”

Still another reason why some people have a hard time accepting the miracles described in the Bible is because they compare them to Greek and Roman mythology — tales of pagan miracle accounts that are clearly superstition. The difference, however, between the miraculous events recorded in the Bible and those in pagan religions are the firsthand accounts. In the Bible, miraculous events are always validated by the testimony of eyewitnesses.(I Corinthians 15:6)

What is more, their reality is often attested to by Christianity’s adversaries. For instance there are many references to Jesus’ miracles in the Jewish law books and histories. These are not mentioned in a complimentary way, but in a way that verifies Christ performed miracles. Julian the Apostate, Roman Emperor from A.D. 361-363, an ardent opponent of Christianity, also unwittingly admits Christ’s power to perform miracles when he writes: “Jesus … has now been celebrated about three hundred years; having done nothing in his lifetime worthy of fame, unless anyone thinks it a very great work to heal lame and blind people and exorcise demoniacs in the villages of Bethsaida and Bethany.”

So the fact that some so-called-miracles are counterfeits doesn’t mean all are a sham. It’s incredibly unscientific to throw out the miracles of the Bible based on “guilt by association.”

The fact is the miracles of Jesus attest to His person. For the Son of God to dwell amongst us and not perform miracles would be preposterous.

There is only one reason Jesus walked on the water and it’s because God has the power to supersede all the laws of nature. Most importantly, it should be mentioned Jesus also performed miracles to demonstrate His authority to change and redeem lives, which is a considerably greater miracle than the ability to walk on water.

He’s Only A prayer Away!